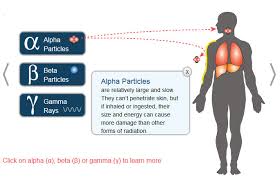 About half of the ionizing radiation we're exposed to comes from nature. It's in rock, soil, and the atmosphere. The other half comes from man-made sources like medical tests and treatments and nuclear power plants.

How much radiation is dangerous?

The chance of getting cancer varies from person to person. It depends on the source and amount of radiation exposure, the number of exposures over time, and your age at exposure. In general, the younger you are when you are exposed to radiation, the greater the risk of cancer.

Exposure to small amounts of radiation doesn't cause any symptoms. But exposure to large amounts all at once may cause radiation sickness and death.

How do different sources of radiation compare?

You may be exposed to more radiation than other people if you:

To understand more about radiation exposure, you may find it helpful to compare some common sources of radiation to a standard dose from a chest X-ray. A chest X-ray gives off very small amounts of radiation.

What can you do to protect yourself?

You can't avoid radiation that occurs naturally. But there are some things you can do to reduce your exposure to man-made sources.