Finding a Way to Exercise

Finding a Way to Exercise 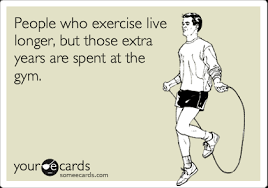 For inspiration to exercise, John hasn't had to look far. His father rides his bike daily to prevent another heart attack. John's grandparents and others in his family also had heart disease.

John's doctor told him that his steady weight gain over the years was putting him in danger of heart problems as well. "He said, 'You want to live a long and happy life, right?'" John recalls. "'You've seen what your dad went through?'"

John, a commercial pilot, got that advice as he watched his dad recover from heart surgery in the 1990s. He started riding his bike too. "I followed my father's good example," he says.

"Over the years, my weight was starting to creep up. I was fooling myselfI was in total denial about how much weight I was carrying," he says.

About 3 years ago, John, now 54, says he realized he had to do more. He was stressed at work. He didn't get enough sleep because his flight schedules changed constantly. He talked with another doctor who told him that regular exercise would help with stress, sleep, and weight gain.

"You hear the mantra of losing weight, eating better, getting regular exercise, and it finally sank in," John says.

He joined a bike club. Having others to ride with motivated him physically and socially. "I've made a lot of friends who have the same priorities," he says. No matter what the activity, doing it with a group makes it easier and much more fun, he believes.

He also joined a weight-loss group, which helped him slim down. By watching how he eats and getting daily exercise, he's lost 25 pounds. "I have another 10 to 15 to go. Even my wife says I look good now," he jokes.

He's so keen on the benefits of fitness, he encourages his coworkers and friends."My mantra is 'Find a way to exercise.' It has made all the difference in my life."

John's story reflects his experiences as told in an interview. The photograph is not of John, to protect his privacy.

For more information, see the topic Fitness: Getting and Staying Active.